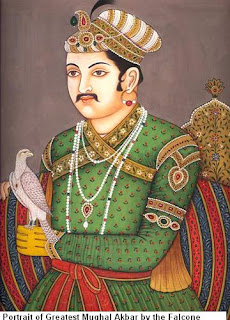 There are only two kings in India which usually titled as The Great !
The Great Ashoka ( 304 B.C to 232 B.C)
The Great Akbar   (1542 A.Dto 1605 A.D)
Both the emperors are separated by  1700  years of time difference but still there are many interesting similarities between them :-
1. Ashoka and Akbar both in the initial stages of their reign tried to expand their Empire and Fought many wars.

2. Way to Throne for both was not easy , both faced many hurdles.

3.Ashoka and Akbar both changed themselves after seen the casualties of the War    .

4. Both followed the policy of Non-violence in the latter period of their Life.

5. Ashoka and Akabar used their power and resource for the welfare of people .

6. Both Emperors tried to start new sect and their own religion ...like Asohka started "Dhamma " and Akbar started "Din -i-Ilahi " , both sects were not new religion but collection of Some common Moral values.

7. Empire of Both kings extended up to Modern Afghanistan. (Most   Difficult to control and retain)

8.Ashoka and Akbar both tried to have cordial relations with other neighboring Empires . Ashoka with Greece& Egypt and Akbar with Iran & Ottoman Turks .

9. Ashoka and Akbar followed the Policy of Religious tolerance towards their Subjects.

The Great Ashoka
The Great Akbar
They Both are still inspiring  millions of Indian ...that Greatness of the Power lies in its Use !

Popular posts from this blog

Vivekananda :" The greatest sin is to think yourself weak !"

May 17, 2012
Swami Vivekananda    " To succeed, you must have tremendous perseverance, tremendous will. “I will drink the ocean”, says the persevering soul; “at my will mountains will crumble up”. Have that sort of energy, that sort of will; work hard, and you will reach the goal." "First of all, our young men must be strong. Religion will come afterwards. Be strong, my young friends; that is my advice to you. You will be nearer to Heaven through football than through study of Gita. " Swami Vivekananda is one of the Greatest persons ever born in India .He was born in Calcutta on 12 Jan 1863 A.D ( Today 12 Jan is celebrated in India as National Youth Day ) . His original name was Narendra Nath Datta.  During his childhood on many occasions he automatically gone in to Deep Meditation  and have great fascination for ascetics ,monks and Mystics . Narendra had varied interests and a wide range of scholarship in philosophy, religion, history, the social sciences,
Post a Comment
Read more

June 02, 2012
Concept of Maya (illusion ) is given by the great Indian  Philosopher,Teacher ,Saint  Adi Shankarcharya in 9th Century A.D. in his Advaita Philosophy. One the Greatest philosophies after Buddha and Mahavira. Maya means illusion which restrict all the organisms of the universe to see the ultimate reality "The Brahama " " The one ". Adi Shankarcharya Maya is as real as physical world but it is not Truth , actually it is curtain that hide The truth . When we observe the world we saw differences in physical , mental , ideological , conceptual existence on every plane, in every dimension , Maya creates an illusion of duality but the Truth is always behind Maya . The world as we think is just a reflection  created by Maya ,All our relations , dreams , aspirations , ideologies and life is just a Grand Design of illusion ...We live ....We love ....We hate ...And We die in this illusion ( Even our death is also a biggest Illusions of all ). The Great
3 comments
Read more