Jainaism and Theory of Relativity


Jainism is one the most scientific religion developed in the World. It purely based on logic,perception and inference as the valid source of knowledge.

Mahavira give this world one of most revolutionary theory " Syadvada" ( "May be ..") 2200 years before the rise of modern science .

It is based on the conception of reality as extremely indeterminate in its nature.According to it ,
Truth is relative and can be looked at from many points of view (Anekanta ) and that each view-point yields a different conclusion. The nature of Truth is expressed completely be none of them, for reality admits all predicates .
According to Mahavira the truth /Reality is so big so huge so unimaginable that it can not be observed completely  at one point ,It has many dimensions .It is very similar to the Theory of Relativity . 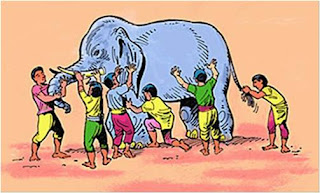 According to Syadvada the Truth has following dimensions  :-


3. Syadastinasti : A thing is relatively both real and unreal ( Exist and Not exist Both )

5. Syadasti ca avaktavyam : A thing is relatively real and indescribable ( Exist  and  Undetermined )

6. Syannasti ca avaktavyam : A thing is relatively unreal and indescribable ( Not Exist and Undetermined )


Due these reasons Mahavira always said " DO NOT Say Definite Truth ! " ( Because Truth can not be one ...it has many dimensions and all are right and wrong at the same time !)


So, Friends next time you are telling  a Truth remember its opposite is also correct !