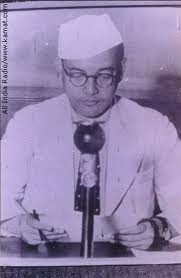 Subash Chand Bose "Netaji" was an Indian leader who led an Indian freedom struggle inside and Outside India Both. He has a great vision of Indian Independence and once has more influence on Indian masses than Gandhi or Nehru . He was Born in Orissa in 23 Jan,1897 . He went to study Fitzwilliam college , cambridge .
He appeared for ICS exam in london and qualified it , yet not joined the British civil services .
He actively participated in Non cooperation movement and civil disobedience movement .He was socialist political leader and latter on become president of Indian National congress in  1938 A.D.
At the eve of 2nd world war Bose escape to Germany via Afghanistan and Soviet Union.
Later on he became the Commander in Chief on Indian National Army in Singapore.
The main objective of INA is to defeat British with the help of Japanese .
INA attacked India from North east at Kohima and Imphal ....At some place INA got succeed but later due to defeat of Japanese by British INA also surrendered in Big numbers .
The Sacrifices of INA is still remembered in India with Great Honor.
Bose is alleged to have died in a plane crash in 18 Aug 1945 A.D ,while en route to Tokyo. The reasons of plane crash is still not clear .

Today Bose is become Legend in India his contributions in Indian National Freedom struggle is still remembered in India.

I can Only say