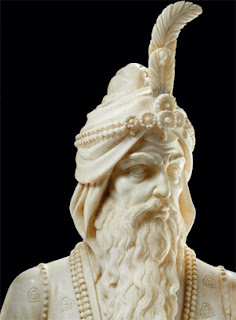 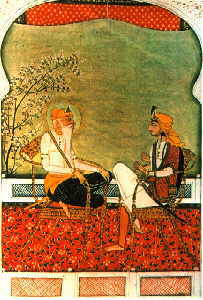 Maharaja Ranjit singh was the First King of the Sikh Kingdom in India. He was born in Gujranwala (present pakistan)  in Sikh Family.He lost his one eye in the childhood due to smallpox. He became the commander of of Sukerchakia Misl  and later on proclaimed as the emperor of Punjab 1801 A.D  . He was the most exceptional ruler of Punjab. His empire stretched from Modern Punjab  to Kashmir and Afghanistan to Lahore . He also get back Kohinoor diamond from Afghanistan form the descendent of Nadir shah

In his rule East India Company never dared to attack on Punjab .During his time Sikh Army was the Second best army of Asia ( 1st was of East India Company).
Maharaja Ranjeet Singh died in 1839 A.D . Only after his death Punjab become the victim of the policies of British.and Finally in the period of Lord Dalhousie Punjab was finally merged into The Empire of Britsh East India Company.
Posted by Unknown at 9:46 PM